The worldwide correlation between gun ownership and crime rate is visibly pointing toward a crime reduction as the gun ownership increases. So, I decided to investigate this further…

Before doing any analysis, I just want to give you the barebones facts: 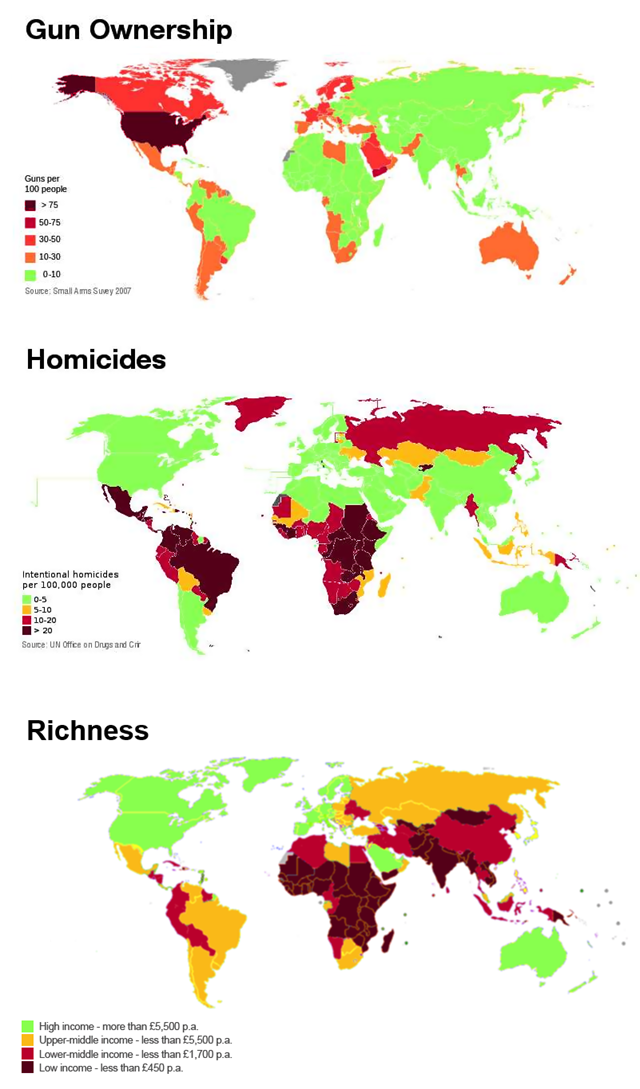 The initial claim  relates only the first two maps and it therefore completely miss the point.

By stating that gun ownership is reducing the crime rate, it basically does nothing more than stating gun ownerships and richness are strongly correlated, and that poverty is the main reason behind the homicide rate.

It doesn’t mean that guns do not reduce crime rate…

What that means is that it’s certainly not the main factor.

In order to analyze the real effect of gun ownership, we’ve to take countries in the same level of income and compare their gun ownership and crime rate. So, let’s do that:

From this table, we can infer that the effect of gun ownership on crime in rich countries is sufficiently low to be immeasurable on a worldwide scale. If I’ve some time, I’ll make more meaningful analysis for those countries at some point but…

But when you analyze further…

However, as poverty increase, the effect of guns becomes clearly measurable (each pair of country share a large border so they can safely be compared without too much bias):

From this table, we can clearly see that countries having more guns have higher crime rates.

And, in most cases, the countries having more guns also have a slightly more important average income than their neighbors (which explains why they have more guns).

It perfectly validates the whole model.

You find out that guns increases homicides

As a conclusion, I think it’s safe to conclude that if you give easy-to-use killing weapons to the population, you increase the homicide rate. It’s exactly what you would expect.